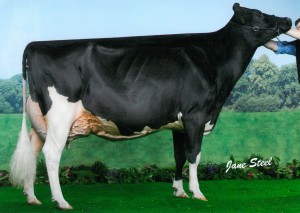 Alongside this all 11 heifers inspected scored VG. Once again the consistency in the herd has shown through with another tremendous day’s classifying. Among the heifers classified was our recently imported Belgian heifer, Arriva De Bois Seigneur, an Atwood daughter which is owned jointly with Heavenly Genetics.